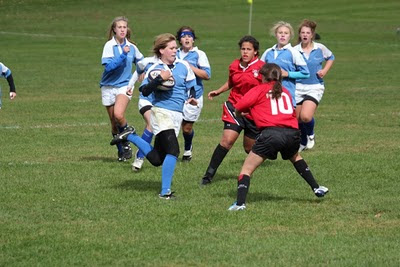 WAUKESHA, Wis. (October 2, 2010) — Catholic Memorial High School Girls Rugby handed defending state champion Divine Savior Holy Angels its first loss in seven years, beating the Chargers, 7-5, today at Minooka Park in Waukesha, Wis. DSHA had not lost a match in Wisconsin since Oct of 2003, making most of this year’s seniors only 10 years old the last time the Dashers lost a match. (For the record, KM is the last Wisconsin club to defeat DSHA in Wisconsin, when it went 2-0 against DS and became the first club in Wisconsin state history to have an undefeated record during regular season play -- DS having a perfect recrod in Wisconsin since that date!).

DSHA pulled ahead early in the game with a try made by senior outside center Elli Miller, with the half ending 5-0 in favor of DSHA. Just 10 minutes into the second half, CMHS junior fullback Sara Dillett fielded a short kick and raced around the corner, outpacing three defenders for a cross-field 60-meter try. She went on to nail the conversion to give the Crusaders a 7-5 lead, sealing its first win in team history over DSHA. Both teams stand at 3-1 overall in conference play after today’s match.