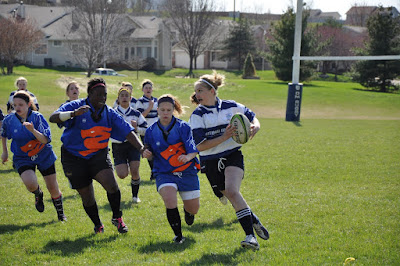 -- Kettle Moraine's Makinzie Rogahn pictured, on the run against the Kansas City Dragons--

In addition to the hosts, the St Louis Sirens, Liberty United (from KC), Orono (MN), and Pearl City, IA were in attendance. One of our field reporters was there and provided a few details:

"The Kettle Moraine Knightmares split into two squads for this past weekend's tournament. The All Blues started the day off strong with a 50-0 display against a new Liberty, MO squad. The All Blues were led by sophomore Megan Tutkowski with 3 tries in the opening match.

The Stripe squad found a much more difficult match to start off the day. Against Orono, one of the top teams in MN, they found a back and forth match leaving them on the losing side of 10-15. Freshman Justice Powell and Caelee Whiteaker were able to find the try zone in the losing effort.

The All Blues last match for Saturday found them against a more experienced Kansas City team. With balanced scoring between the forwards and backs, they were able to prevail 15-0.

The Striped squad had a much easier time in the 2nd match of the day against a St. Louis side. The communication between the backs and forwards was greatly improved and resulted in a solid 51-0 victory. In the picture, rookie Freshman Makinzie Rogahn, takes off on a run for her first try of the day.

Frustrated from the first match on Saturday the Stripe squad again committed to a balanced attack and being able to move the ball quickly to space out wide. The backs used their speed and scampered their way to 8 tries in the route of the young Liberty, MO side. Junior Megan Klemm, put on a kicking display converting 8 of 11 opportunities for the extra points.

The All Blues finished off the day against their stiffest competition of the weekend in Orono. Orono, quickly took to the attack and marched down the field in a confident push to the first points of the day. Down 5-0, the All Blues again looked to their backs to showcase their speed as they fought their way back into the game. With the forwards able to control the rucks, the backs were able to find the space needed to answer back with 3 tries of their own. After a long, hard fought weekend, the teams were pleased to end the day with a 15-5 victory.

The Knightmares now look to reassemble and continue to prepare for their march to the Midwest championships in Indiana on April 30th. Said coach Jeff Noe, "I can't wait, after this weekend a lot of newer players are beginning to step up and accept a larger responsibility as part of the team. They are making it very difficult for selections going forward."
Posted by Wisconsin Girls Rugby at Tuesday, April 19, 2011