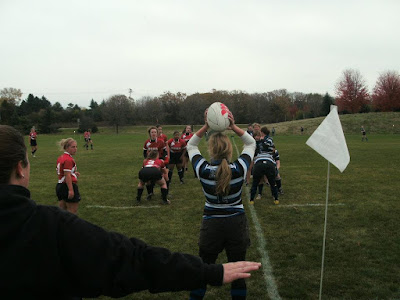 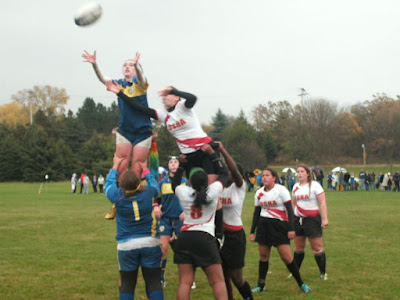 Coach Klein, of DSHA, said afterwards, "that might've been the greatest high school game ever played in the state. The first half was so tight, back and forth. The speed of the game was impressive."

"I don't think people appreciated how hard-hitting that game was," he added. "That was as physical a match as we've ever played."

Catholic Memorial came out fast from the kickoff and preceded to hammer away at the Dasher's defense. Despite long periods of pressure and possession in DSHA's half, the Dasher's defense held. DSHA had two chances to score on counter-attack breakaways, but a scrambling defense from CMHS was able snuff out the opportunity.

The teams entered the halftime break deadlocked at 0-0.

DSHA showed its character by coming out with renewed intensity from the break. A try two minutes in, sparked by a gigantic tackle-breaking run from senior Captain Aleja Ross, set the tone for the second half.

CMHS came right back from the kickoff, approaching the DSHA 22, but were repulsed after multiple phases. A try from sophomore Kayla Pavella put DSHA up 12-0, and then again DSHA found itself again backed up near their tryline. Great defense and a clearing kick kept their shutout intact and sophomore Beth Pakorny was able to cross over for one more try to end a wonderful match.

Crusader coach Waliszewski added afterwards, "We gave everything we had. I'm incredibly proud of our ladies for their character and determination to play as a team against the most challenging of opponents."

Kettle Moraine finished off another good year with a hard-earned victory in the bronze medal match. Senior Captain Andrea Mertins, switching to fullback for this match, was impressive in defense and attack.

On field two, Menomonee Falls defeated Oak Creek in the closest match of the day, 8-0, for the division two championship. Oak Creek showed great improvement over their earlier loss during the conference season, and with two teams playing in the division, seem to be building momentum for future success. Congrats to Falls on another good season.