LLR All Decade Team (the backs)

As we publish part ii of our latest article, we wanted to remind readers and especially alumni players and coaches that while we've tried our best to be accurate, it's entirely possible we still have a few errors of spelling, omission, or position.  This is also an editor's pick team and not an official WGR award.

Please send us comments, stories and corrections, either by posting in our comments section or emailing: wisconsingirlsrugby@gmail.com

Lastly, we've been hearing from a lot of the nominees and their teammates, and have enjoyed hearing again about what a great experience you had.  Maybe it's time for you to reconnect with WGR?  We need help giving more girls the opportunity to have the experiences you did.  We need help at all levels:  league administration, coaching, reffing, touch judging, sponsorship.  Contact us to get back involved.


9 Scrumhalf:  So many great halves came through our league that 9s and 10s might have been the most difficult position to pick.
Brittany Houston (Vernon)  MVP of the old USA-All-Star regional tournament a few years back.  Pure class with a magic skip pass, a golden boot, stout defense, and a composure that inspired her teammates.  Nailed an amazing drop goal to help Vernon come oh-so-close to upsetting national power Kent in the national semifinals her senior year.  Ultimately they finished 3rd after defeating Summitt, Co.

Ann Marie Kloiber (DSHA)  Yes, this is Papa Joe's daughter and she's another halfback from Wisconsin's great rugby family.  Named to the all-tournament team at the 2002 National Championship.  Not the strongest, not the fastest, but always showed up in a position to make a key play.  Leadership:  another captain candidate. Composure under pressure.  Never outworked by anyone.  In the 2002 national semifinals she seemingly came out of nowhere to make an incredible tackle on the opposition's best player, forcing her into touch just before the try line.  The halftime whistle blew and the Dasher's escaped without giving up points and eventually upset a more athletic team by one score.
Emma Pesci (Catholic Memorial) Perhaps the smoothest delivery of any scrumhalf on the list.  Could speed up a game with her passing and ball handling.  Longtime MW selects and Grand Valley St player who is now coaching collegiately.
Sarah Perdzock (Kettle Moraine) The Byron Kelleher of this list.  A bruising #9 who had an incredibly strong and accurate pass but who would also smash you like a battering #6.  The most physical and strongest defensive #9 on this list.
Rachel Santulli (Brookfield)  A feisty game manager who was constantly sniping around the edge and setting up teammates.  While lacking the power on her pass of the others, her change of style at nine made everyone around her better.  She’s another player respected by teammates and opponents alike.
Honorable Mention:

Samantha Bruni (Vernon)  Although she could pop up anywhere, at fullback or wing perhaps, she's another excellent all-around player who played with passion.  The Austin Healey of WGR.  While maybe not be a classic 10, just made plays.  Kept on playing after high school at a high level with UWM.


Erin Coogan (DSHA) An intimidating presence in the midfield.  Would put a big hit on you if you tried to crash down her channel, could spin it out wide on attack, or bomb a deep kick to break your spirits. "Coogan and Haas" formed an unbeatable team for years.  There was no one else like her in WGR then or in the years since.

Nicole Heil (Kettle Moraine)  Played for her country at 10 on the USA u19 Eagles and moved on to a long career as Whitewater's 10.  A fantastic defender and runner who was a four year starter in both high school and college.
Natalie Mills (DSHA) Began her career as the best finisher in the league scoring a few dozen tries her first two years on the wing and at fullback.  Used that finisher’s speed and strike running, a big and accurate boot, and smart distribution to drive opponents mad attempting to keep up with her.  Toured the UK with the USA u19s and played at Marquette University, leading them to move future Eagle Sylvia Braaten from 10 to center because of her special talents.
Honorable Mention:
Toni Cattani (Kettle Moraine);  Lacy Kutz (Kettle Moraine), Lauren Maddente (Catholic Memorial), Melissa Ponsegrau (Vernon), Allison Urbanski (DSHA).
Center:
Marie Haas (DSHA)  Our back captain.   A four-time national champion.  Never lost a match in her career.  A strike runner who knew when to distribute.  Had an unparalleled combination of strength and the pace to finish.  Seemed to always make a big play when needed most.  An automatic, unanimous pick.
Alex Glorioso (Kettle Moraine)  The best tackle-breaker in the group.  Ran like a tailback; famous for a great spin move in the open field. She could run you over or sidestep you too.  A fan favorite of the Amazons after KM defeated Sacramento on their home pitch.  Known for taking a short break during the midst of a match, crouching down on the field for a few minutes, while she popped her shoulder back in, only to return without missing a beat.  Epitomized the toughness of the great Kettle Moraine teams.  Played some wing too.
Ellie Miller (DSHA) Perhaps the speediest center in WGR history.  Nicknamed “Red” by her opponents.  Her battles with Armstrong were legendary and a contrast in style.  Also slots in at fullback and wing.
Maggie Armstrong (Catholic Memorial)  The best tackler and defender in the midfield.  A powerful strike runner too.    Played in New Zealand for a time and time will tell how far she gets.  Still playing at a high level.
Honorable Mention:
Jenny D'Acquisto (Kettle Moraine), Megan Foley (DSHA), Sarah Marcoux (DSHA), Maggie Strachota (DSHA), Kaissee Weissmuelller (Brookfield)
Fullback:
Sarah Chiemelewski (DSHA) Tough to top her winning the MVP of the USA Rugby National Championship game.  Incredible speed with lightening quick feet and sidestepping.  Teams risked a try every time they kicked her way.  Part of the reason DSHA was absolutely deadly in counter-attack during her years.  Could also kick back if needed.


Anita Dillett (Catholic Memorial)   The third of five Dillett sisters to play rugby at Catholic Memorial.  Probably the best at catching kicks of anyone on the list.  Could levitate in the air when she jumped to catch.  A great open field tackler, with a huge sidestep.  For a few years, Dillett's were the only players in the state to score tries against DSHA.  Still playing for the St Louis women's team.

Colleen Brennan (DSHA):  While she's now out in New York singing the national anthem at Yankee Stadium and living the dream, she used to be one of the standouts from the great early Dashers teams.  In an era when the Dashers regularly played collegiate competition just to get matches, she was almost always the fastest, best tackling back on the pitch for either side.
Honorable Mention:
Dana Anderson (Brookfield), Kristin Konieczka (Kettle Moraine)
Wing:   In an era of less organized defense and higher scoring, there are many memorable speedsters and impressive wings, but two of them top our list: 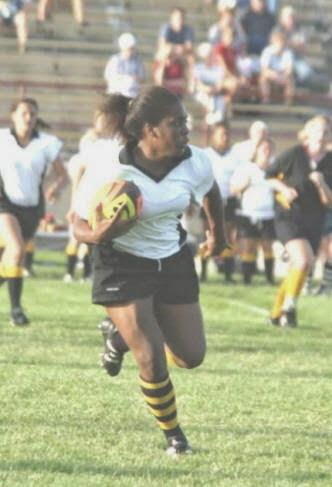 Lauren Franzen (DSHA)  The smallest, but most physical wing on both defense and offense.  Incredibly tough and explosive in contact.  The best defensive force at wing we've ever seen in WGR.  Had finisher's speed with the tackling and breakdown ferocity of a #7.  Played some center as well despite her slight stature.   A playmaker who made everyone around her better.  Sheer intensity.
Angela Matthews (Northshore) To this day, a finisher like her has not been seen in WGR.  The perfect foil to Franzen’s Shane Williams-like running.  With the size of a higher level prop and the burst of a sprinter, she dominated defenses for several years.   The most physical and destructive runner in WGR lore in a Jonah Lomu-like way.  Most recently seen playing football for the Green Bay Chill women's football team as a running back and DE.
Honorable Mention:
Brittany Biedenbender (Vernon), Andi Broge (Catholic Memorial), Andrea Hansen (Kettle Moraine), Megan Schulz (Northshore), Elise Tobin (DSHA), Erin Voelz (DSHA)(Special Note:  the first scholarship player in WGR history), Emily Zemplinski(Vernon)
Posted by Wisconsin Girls Rugby at Thursday, December 04, 2014