Rugby on NBC this weekend 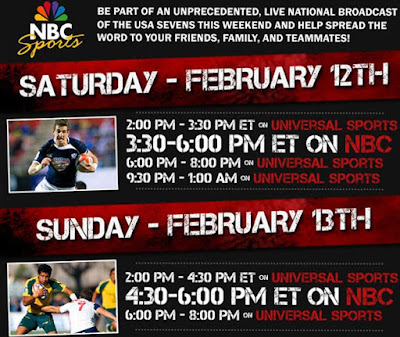 Check out some rugby on national television this weekend. With rugby 7's added to the list of upcoming Olympic sports, the USA is building momentum with a major international tournament held in Las Vegas this weekend. On NBC, catch the action from 2:30-5pm Saturday and 3:30-5pm on Sunday.
Most of us are used to rugby as a game played with fifteen players on each side. Sevens though is an abbreviated version, like futsal is to soccer, with less than half the regular number of players on the same size pitch. It's fast, skilled, and free-flowing rugby at its finest. If you get a chance, teams like Samoa and New Zealand play a unique and special brand of sevens that is just amazing to watch. Samoa won last year's USA 7's tournament with a dramatic last minute try and have hopes of repeating this year.
Sevens is offered in Wisconsin during the summer months at several tournaments across the state. The most famous and prestigous being the 29th Annual Lakefront 7's hosted during Summerfest right along Lake Michigan's shoreline. It features over 70 teams, with a special high school girls and boys bracket set for Friday night. The organizers are hoping to expand the high school brackets this year!
Posted by Wisconsin Girls Rugby at Friday, February 11, 2011