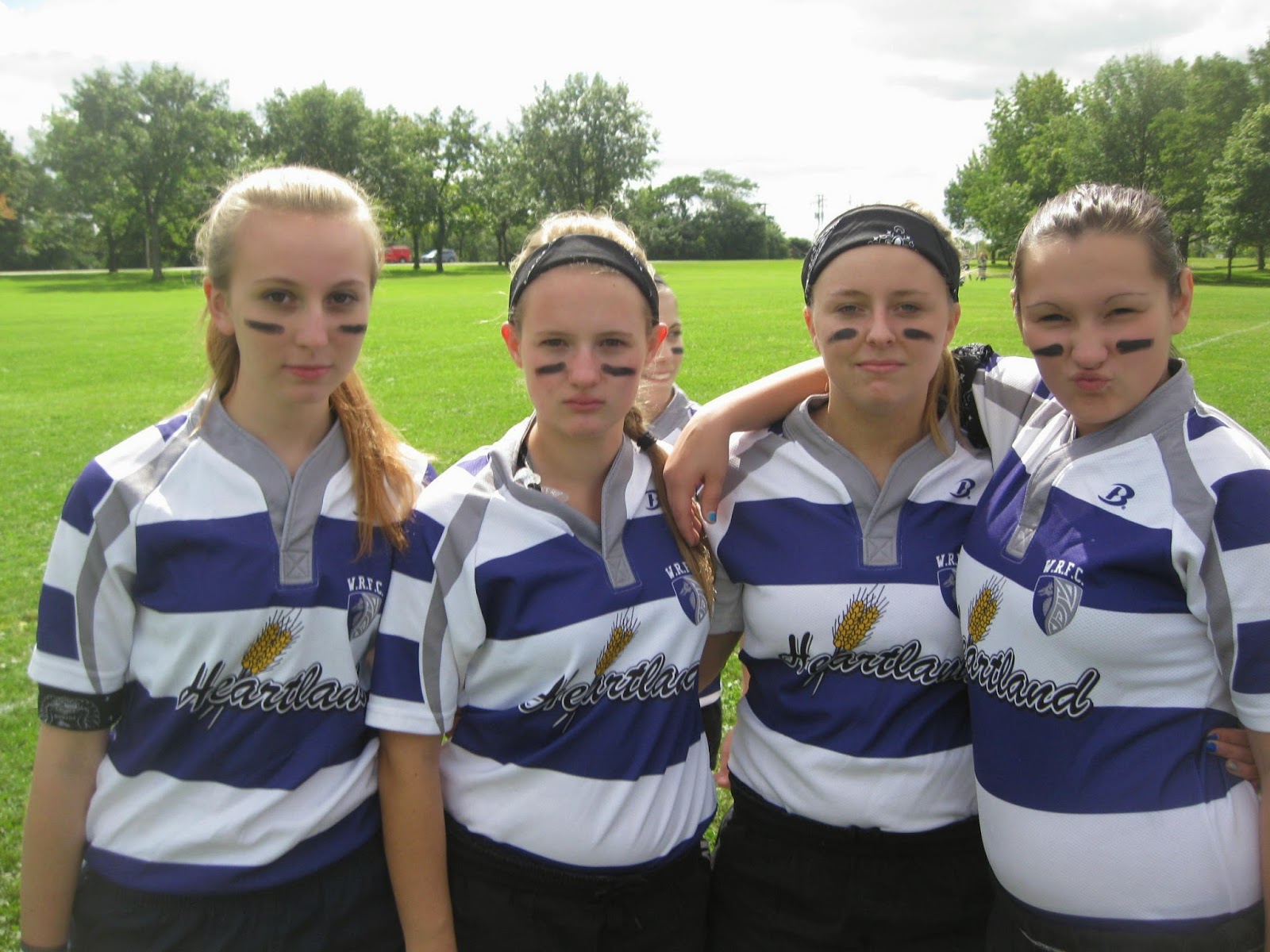 Catholic Memorial shut out the Knightmares in the conference opener on an unusually chilly afternoon out at Delafield's Naga Waukee Park. While junior Lizzie Walicki and freshman Allison Koenig led the way with multiple try performances for the Crusaders, it was Sophomore Christie Hill and senior Lizzy Jacobson who led  the defensive efforts that set the tone for the victory.  Their energy and communication stood out.  As a result, KM struggled to keep possession, although when they had some, they found some success.
Kettle senior Courtney Crouse was the Knightmare player of the match.  She stole several balls, broke some tackles, and was a constant spark.   Kettle Moraine freshman Sommer Arndt is another Knightmare to watch.  In her first conference match, her athleticism and tackling were a big plus for KM.

New seems to be the key word for this match.  New players, new coaches, new attitude, new team.  As expected, senior Reina Anderson was a serious scoring threat for the Bruisers, but the Bruisers also added 13 new recruits into the mix.  Eight of the rookies scored tries in their debut match.   Brookfield's new coaching staff of Head Coach Neil Grintjes, Rob Young (Uni of Minn), Carly Amy, and Carly Rosenthal began their campaign in fine fashion.  After only graduating 3 Seniors last year, Brookfield seems to be coming together after some coaching transitions in the recent past.    Even without seniors Emily Winter and Destiny Dallas due to the ACT test, the team flourished with new center freshmen Aryanna Primer (3 trys) and Reina Anderson (4 trys).  The team moved the ball well among the forward pack and were led by junior Cpt. Raquel Galarza and senior Miranda Bradford.  Galarza completed 4 extra point conversions.


DSHA over Oak Creek
The Dashers dominated the Knights although Coach Klein noted that Oak Creek made significant improvements in just a week's time.  DSHA Senior Claire Schmidt put on a special performance, with several tries and dangerous runs, shifting from the backline to the pack as the match went on.  Her rare combination of strength and speed caused problems all game long for the defense.  Senior Kendyl Braun had one of her best games in the red jersey.  A strong, tall fullback, she proved difficult to handle in space.  Forward Amanda Ezzell proved an asset to the Dasher's efforts and was one of the noteable forwards on the day.
For the Knights, sophomore Megan Bird was valiant snuffing out numerous DS breaks.  Her speed and toughness were clear for all to see.  Oak Creek rookie, junior Abby Larson, made a strong debut with strong tackling.

DS jv 30 v Vernon 5            430pm
Vernon was much improved over last spring and they came out hard, scoring a try early and held a tense 5 to 0 lead late into the first half, before the Dashers punched in two quick tries to lead 10 to 5 at the break.  Sophomore flyhalf Danielle Macpherson, the younger sister of varsity flyhalf Kat Macpherson, was one of the standout players of the match.  She showed why her potential is held in such regard by her coaching staff and we expect we will be seeing more of her in the future.  Forward Lexi Muszytowski at tighthead prop played an outstanding match and was a big part of the younger Dasher side stopping the forward bashes that are a big part of Vernon's style of play.
WGR staff are still waiting on a report from Vernon's staff for further details.


Sunday Sept 14th
Muskego 0  v Fond Du Lac 68
The Fond Du Lac Sirens came away with an impressive road win in their conference debut under Head Coach Amanda Pohle.  Try scorers included Lexi Engelhardt, Kristina Moul (3), Brittany Witty (2), Elizabeth Stanchfield, Maggie Kelly, and Erin Driscoll.  Both of Witty's tries came from running great lines of support off her teammates.
Maybe the most noteable part of the match was Maggie Kelly's goal kicking.  She hit an incredible 9 out of 10 conversions and to quote Coach Pohle, "her kicks were HUGE."  Kristina Moul's defensive work was also noted by coaches as impressive.