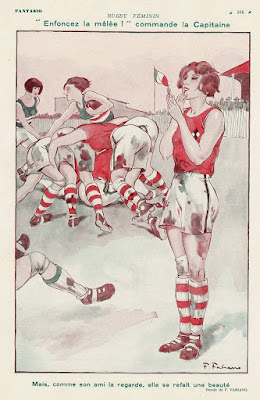 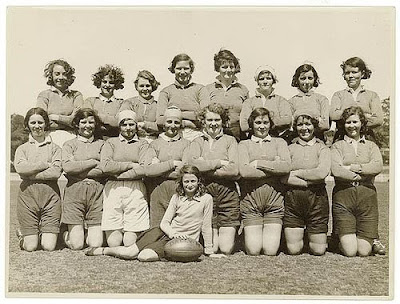 For our 201st post, we'd like to pay tribute to all the girls playing rugby in America. You are pioneers who help break stereotypes. For one, there haven't been women playing contact sports in great numbers, especially as a team sport. In addition, you've all been playing a sport that for a long time was seen as foreign.
Sometimes rugby inspires that kind of independence and i suppose it's been that way for some time. Women's rugby had some success in France starting in the 1920's. Some French even tried a women's version of rugby they called "barette" which did away with rucks but kept scrums and lineouts. Our first vintage picture is from a French magazine advertisement of that era. The second is a group of Australian ruggers from New South Wales.
The first documented evidence of an attempt to form a purely women's team occured in 1891 when a tour of New Zealand by a team of female rugby players was cancelled due to a public outcry.
In Wisconsin, Divine Savior Holy Angels High School began forming the first girls team in 1996. These brave young women played mostly college b teams. It took two years before they scored the first try in team history, thanks to a young Miss Allison Urbanski. It wasn't until years later, the Fall of 2000, that the second team, Kettle Moraine, came on the scene.
Posted by Wisconsin Girls Rugby at Thursday, January 06, 2011