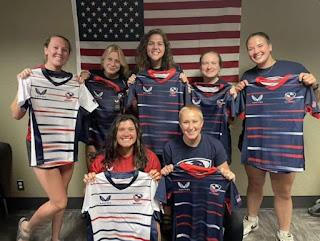 --The North America 7s Selectside event took place this past weekend.  The teams, including the Badger Academy with several Wisconsin coaches, finished off the event with the SacPAL Amazons winning the final 19-17.  Order of finish:

--EIRA (Eagle Impact Rugby Academy) took over 40 girls on a tour of Ireland, playing several matches on their tour.  Several Wisconsin student-athletes are participating including Catholic Memorial's Audrey Fryda playing for their u18 team and Green Bay Rugby Club's Carolina Martinez with Madison Furies' Cece Stowers playing for their u16 side.

--We apologize if we missed any others!

Wisconsin Girls Rugby, sources tell us, has settled on conference alignment for the upcoming Fall 2022 Girls High School Rugby State Championship season.  Featuring five teams in each conference, the season culminates in a semifinal round followed by the WGR State Tournament on Oct 30th at the Milwaukee County Sports Complex.

After playing last fall together as a co-op team, the Pulaski and Green Bay programs are playing as their own clubs, which is how they both started.  With multiple high schools over 1000 students in the vicinity, hopes are high that rugby can continue to appeal to the many student-athletes in the area (GB Preble, GW East, and Pulaski HS all have over 1000 students in addition to the smaller GB SW high school)

Muskego is in its 2nd season after a hiatus of several years.  As a school-supported program they have the potential to bring in strong participation numbers.

Several teams are looking to schedule additional JV matches which is an encouraging sign for the overall growth and health of the league.

The Kettle Moraine (Knightmares) along with Brookfield Bruisers are combining for the fall season due to low numbers.  Administrators are hopeful these two long-standing programs can improve their drawing power in the area.

The format of the Semi Final weekend on Oct 20th is TBD at this time. Organizers are unsure of returning to the Cottage Grove rugby facility for a tournament style semifinal event. 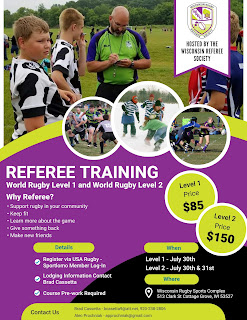 Genevieve Ruesch, a DSHA class of 2017 alumni, recently completed her career and degree at Trinity University in Dublin, Ireland.   In addition to being a regular starter at scrumhalf at Trinity, the #9 with an incredible pass became the first American to captain the successful Irish university team.  While Ruesch was a heavily recruited high school player during her time at DSHA she chose to pursue her literary and educational goals oversees and was able to continue her successful rugby career at the same time.

The first picture below captures her the second time she became a National Champion, granted her most recent is in a different country.  Her first was with DSHA in 2017 when she led her team to victory over Kahuku HS at the Girls Single-School National Tournament.  Her university side pictured below recently won the National Irish Touch Championship.  It's an idea we hear she's interested in promoting in the States as well. (Pictured bottom row, fourth from right) 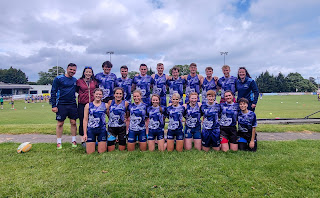 The Lakefront 7s has boasted a strong high school girls bracket the last two years and this year offered some nice variety of teams throughout the Midwest.

This year, Michigan's Sparta Rock defeated Hamilton from Wisconsin in the final 50-0.

Also competing were teams the Badger Select girls program, the Carrol Chargers of Indiana, Madison Furies, and the Chiefs of Illinois.

On Saturday June 18th, the Wisconsin Girls Rugby HS All Stars, coached by Jeff Noe traveled north to compete against Minnesota's select program.  Playing 15s on a perfectly sunny and 62 degree Saturday, the girls won 60-21.  Congrats to all the players who made the commitment to represent their state and to offer our northern neighbors an opportunity to learn and play more 15's.  Every girl who attended played and contributed.  For those unfamiliar with Coach Noe, he is one of the best and most experienced coaches in the Midwest having coached with Kettle Moraine girls, the USA u20s, Midwest select programs, and the NSCRO 7s All Stars, in addition to Winona St men's rugby.

Many thanks for Rugby Minnesota for playing 15's in an effort to get more kids playing.  Much of their league has shrunk the last few years and several teams have been playing 10s.

The "Trophy" is uniquely Midwest:

u23 Midwest Side Includes WGR Alumni

The Midwest u23 squad, drawing players from colleges and clubs throughout a wide array of states, includes a number of WGR alumni this summer.

The team includes young athletes who have taken a variety of paths to continue playing.  One is a college freshman in an NCAA varsity Division 1 program, another is ending a long career at a non-NCAA scholarship program and another played club rugby in college and with an adult women's club.  Congrats to each on their success!